The last cuts of secateurs has been given this afternoon, in the heights of Romane. The vintage 2008 is characterized by a rainy May which asked to be very careful for the sanitary state of the vineyard and for a lot of work in June (thinning-out of leaves, disbudding) and then in summer to aerate at the most the vines. Summer was cooler than usualy and rains at the end of August / beginning September delayed the beginning of the grape harvests but the potential development of diseases was stopped by the freshness of September. 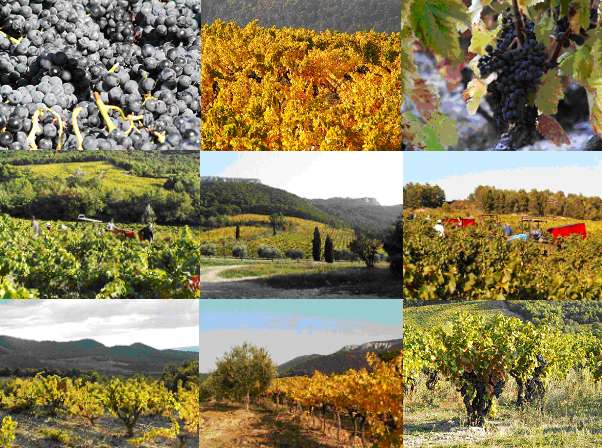 We began to harvest local our “Vin de Pays” between September 16th and 20th, after the last rains and our Gigondas from September 24th. We fixed the date of the beginning of grape-picking by following maturity studies. In comparison with the last 10 years, the grapes had over the last weeks of August and the beginning of September, the same sugar rate than year 1998, but with a bigger acidity. 2008 is thus a belated year in regards with the last 5 years (since 2003, year of drought) but stays a normal year if we compare it with older vintage (2001, 2000…).

We had then a great weather until the end of harvest. Only a single rainy episode, on October 8th (50 mm), obliged to us to stop it during 2 days. We started again then continuously until October 16th.

For 2008, we thus benefited from a beautiful late fall with a great maturity. Hillsides allowed a good rain infiltration restricting the development of diseases. Vines did not suffer too much from the mildew and presented a good foliage. Grapes in our hillsides reached a good maturity; however in parcels, we could observe some heterogeneous vines, with pink berries which often get rotten; a severe sorting was imperative but also evident to make as we distinguished easily grapes with very good maturity of those which will never mature!